Ray Bradbury And My Creative Process 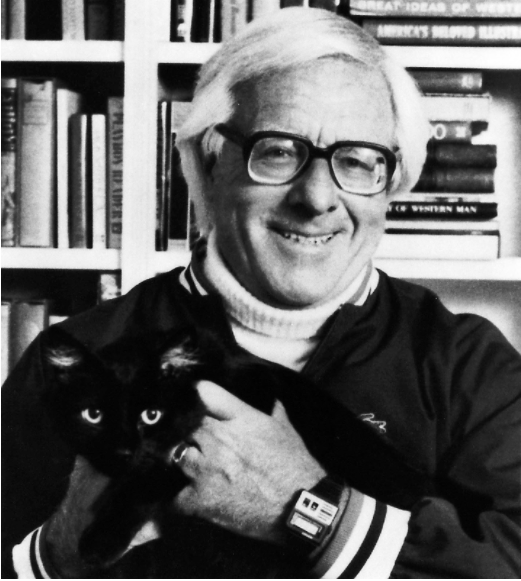 It was time to create another blog installation and nothing was coming immediately to mind until I flashed upon Ray Bradbury and his lists of potential titles for stories. This had been one of his creative M.O.s for years, one that he always mentioned in interviews, lectures, and his book Zen In The Art Of Writing.

Ray would often take an idea from a common object in his house like a cookie jar for example, and create a title like “The Curse Of Cracked Cookie Jar”. This would be added onto his list and whenever he would be stumped for a new story idea, he would refer to the list, choose a title, and begin writing.

I was extremely fortunate to live in Los Angeles when Ray was still alive and well, giving free lectures at book fairs, in-store signings, etc.

There was a very special quality about him that retained the wonderment and magical imagination of a child, a quality cherished by all who crossed paths with him.

One thing that he always stated in his lectures was (to paraphrase), “Write because you love it. The money will follow”.  This is what kept him going for many years before he was a paid and published writer. These words continually resonate in my head pertaining to my music and anything else I tend to create.

We had a special haven of a bookstore in Glendale, California called The Mystery & Imagination Bookshop that lasted for decades but finally fell prey to the gentrification epidemic.

This place was packed to the rafters with new and used books spanning decades, prices ranging from a few bucks up into the hundreds, and specializing in science fiction/fantasy, mystery, the occult, pulp fiction and so much more.

Many famous authors of these idioms passed through those doors over the years as friends of the proprietors and members of this special bookworm community. It was common to spot Ray in there, as well as original Twilight Zone and Star Trek writers George Clayton Johnson, William F. Nolan, Forrest J. Ackerman et. al.

Without going into a hugely divergent sidebar, Forrest J. Ackerman was one of the most important figures in the world of science fiction and coined the term Sci-Fi. He and Ray Bradbury had been close friends since they were teenagers in the 1930’s, and both attended the very first World Science Fiction Convention at The New York World’s Fair in 1939 (It was basically the world’s very first Comic Con).

Between the two of them, they had seen it all – from the prevalence of the telephone in peoples homes, to radio, the phonograph, moving pictures, talking  pictures, television, tape recorders, video  tape recorders, the jet airplane, space travel, the internet, cell phones, smart phones and more.

Getting back to The Mystery And Imagination Bookshop, one particular memory that will always stand out for me was a special birthday party for Forrest Ackerman that was held in the store. Unfortunately, Forrest was unable to attend, as by this time he was very frail and bedridden but Ray was there and gave a wonderful speech in loving commemoration to his lifelong friend and peer. This would be Forrest’s last birthday celebration as it turned out.

There were about 20 of us in attendance altogether.

As Ray cut the birthday cake, I stood next to George Clayton Johnson as the group of us sang Happy Birthday into the store’s computer, with Forrest on the other end of the internet listening from his bedroom This was relatively new technology at the time and for me, I felt such a privilege, honor, and great miracle to take part in this loving moment, knowing that one day it would all be a bittersweet memory – Ray, George, Forrest, the bookshop, and life as I once knew it in Los Angeles. 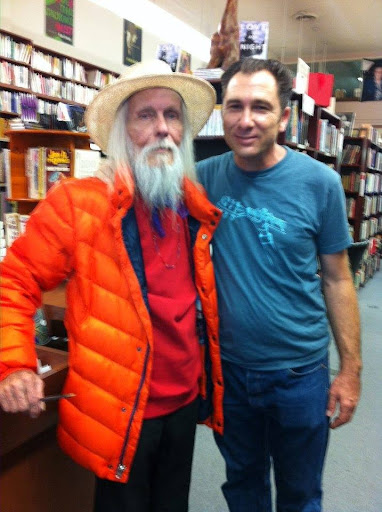 With George Clayton Johnson at Mystery And Imagination shop circa 2015