When my parents bought their home in 1968, Sunset Beach was just another sleepy little beach town.

It spanned about one mile in length, sandwiched between Seal Beach and Huntington Beach in sunny Southern California.

There were two main rows of houses on the strip, one that sat on the beachfront and the other on the Pacific Coast Highway. Each row of houses had a small adjacent road, separated by a sand dune where the Red Car line had once passed through, but which had been ripped out sometime in the 1950s.

As kids, my sisters and I frequently found the old rusty railroad spikes still buried in those sand dunes among broken Nesbitt pop bottles and decaying Schlitz cans with the triangles punched into the tops (before the advent of pull rings & pop tops).

The beachfront was still being built up back then and for every two or three houses, there was a vacant lot waiting to be purchased and built.

Many of the houses were old, dating back to the twenties & thirties – little craftsmen, bungalows, and duplexes.

It was a time when people of any income bracket could afford to live at the beach, and we were part of a community that ranged from well to do professionals, to middle-class families, to bikers, hippies, and low-income surf bums who worked as waiters, boat workers, and carpenters.

There was a certain margin of transient culture found in beach communities back then and it seemed like people were frequently moving to and from the beach or to a different home within the neighborhood.

Because of this, there were lots of garage sales. There were also lots of great items frequently found dumped on the curbside beside the garbage cans; items that people had left behind when they moved.

In 1969, when I was only 6 years old, my mom came home from a garage sale with an Oscar Peterson album and two other records by Cal Tjader.

I didn’t know it at the time, but these two albums would be foundational to my love and involvement in Latin Jazz and Afro Cuban music, leading me to my collaboration with El Gran Fellove 30 years later.

One other element of Sunset beach worth noting is that there was also a holdover from the 50’s tiki bar influence that was still prevalent in some of the local watering holes.

One, in particular, was a bar called Turcs, which was opened in the early ’50s and which still to this day boasts its hand-carved bar stools & Polynesian decor as made originally by a local carver named Tiki Bob. 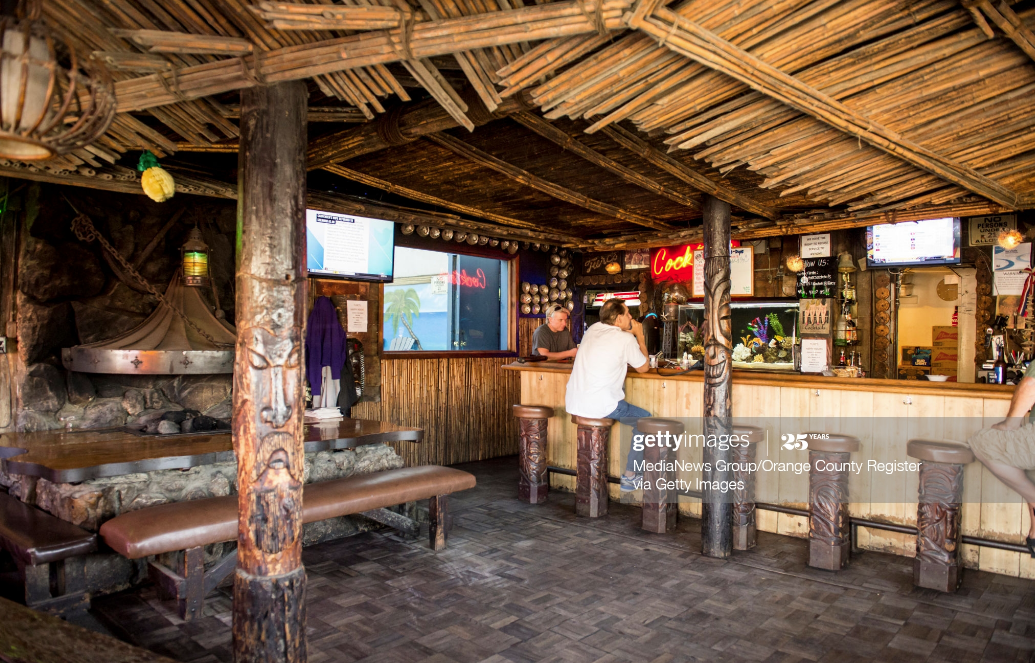 Tiki bars and Polynesian themed restaurants themselves had been created in the late ’40s and ’50s by U.S. military veterans who had served in the South Pacific during World War II and brought the influence back to the states as entrepreneurs.

I remember as a young teenager, hangin’ out with the legendary Tiki Bob, who at that time was already in his fifties.

The 1970s was a total  “free for all” in beach communities. It was quite normal for kids to roam the beach without any parental supervision and party (yes, alcohol and other illicit substances) with people who were in their 20’s through the ’50s. In fact, the majority of my friends during my teenage years were adults.

One, in particular, was my neighbor Bobby Redfield, who was a Jazz guitarist in Cal Tjader’s band. He also had a band of his own that played every Sunday night at Turcs.

It was a Latin Jazz group called “Montuno” and featured conguero Poncho Sanchez before he had a solo career (Poncho was also in Cal Tjader’s band at the time).

The band itself really belonged to the Banda brothers – Tony on bass and Ramon on timbales, plus Charlie Otwell, piano, Sal Crachiolo, trumpet, Roland Mendoza, bongos, and Tom Casey on sax.

This was a killer band that would later go on (without Bobby Redfield) to be known as The Poncho Sanchez Band, make 20 albums, tour the world with people like Dizzy Gillespie, Freddie Hubbard, Mongo Santamaria, etc and even win a Grammy Award. 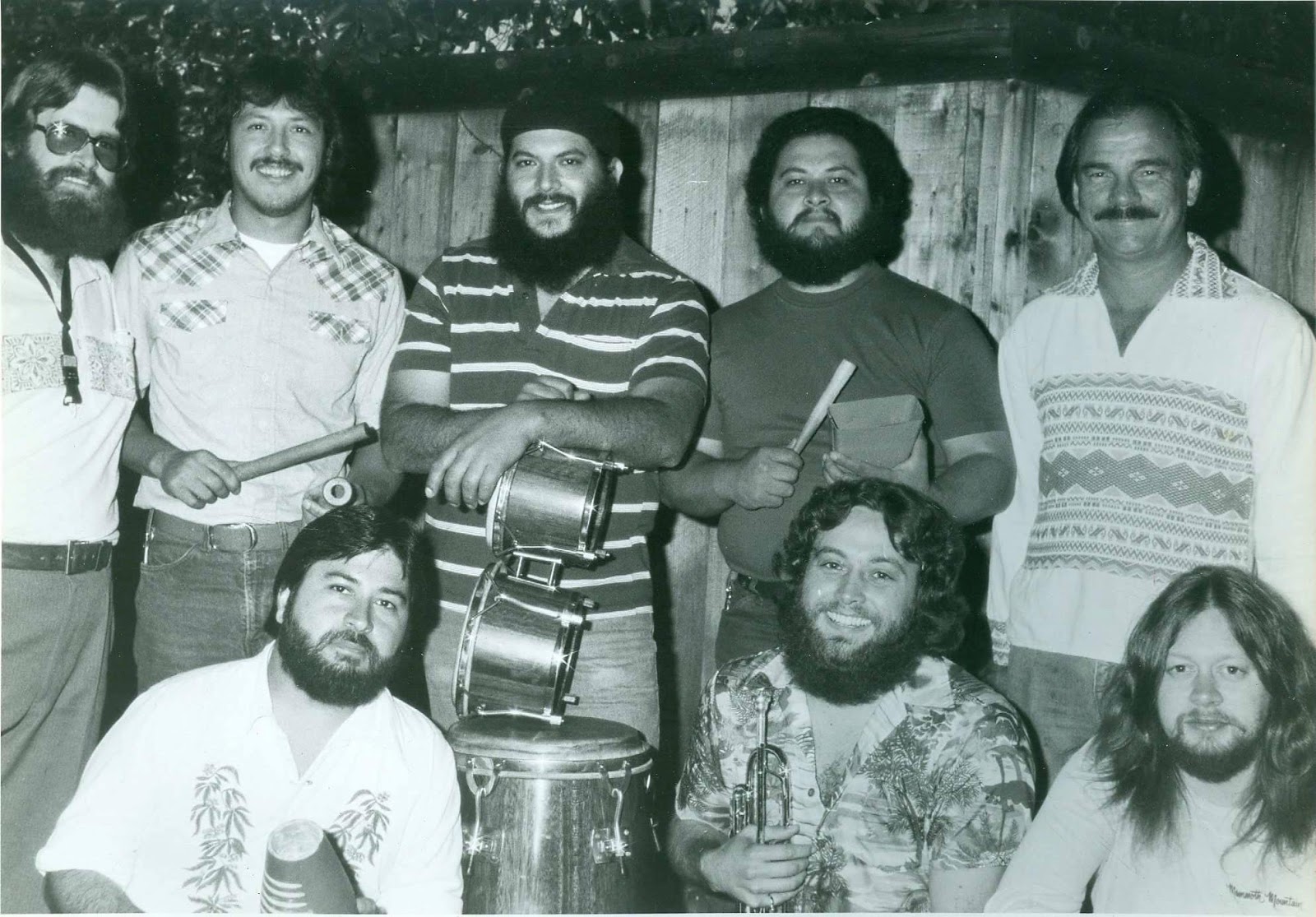 I was privy to see this band on countless occasions and come into a friendship with the members which has lasted over 40 years.

As a young upstart musician, they took me into their fold and mentored me (especially Ramon Banda), showing me Latin Jazz aka Afro Cuban Jazz.

This was part of a musical lineage that came from Cuba to Mexico, and up to California, L.A., and San Francisco in the 1950s, and the Montuno band was an extension of this legacy.

It’s interesting to note that although the tiki bars were influenced by the South Sea Islands, the music of Cuban origins was also intertwined because it’s tropical music, and also because of the big Mambo & Cha Cha craze that exploded in the U.S. during the ’50s.

I was very much influenced by Bobby Redfield, the Montuno band, and the records that they listened to – Mongo Santamaria, Cal Tjader, George Shearing, and later on (1987) they showed me Cachao and the famous Cuban Jam Session albums.

One of the people on these records was El Gran Fellove, but I wouldn’t know him by name for another ten years or more because he was never credited on the back of those album covers.

I was highly inspired by this album series and this is what really propelled me into playing Cuban Jazz. I would discover much later that what we refer to as “Latin Jazz” in the states was called “Filin” (feeling) in Cuba.

Filin was a very niche musical movement in Havana, beginning in the 1940s and one of the key figures in its development was Francisco Fellove Valdez aka “El Gran Fellove”.

Fellove took everything I loved about Cuban music and Jazz, and put it all together in a way that’s enigmatic and uniquely him.

He combined the rhythmic syncopation of Yoruban/Cuban drumming with the sophisticated scat vocal styles of Ella Fitzgerald and Dizzy Gillespie. His showmanship was that of a Sammy Davis Jr, a James Brown, a Cab Calloway, and his improvisational instincts were off the charts.

Flash forward to 1988 – I was appointed to be the musical director and booker of a now-legendary Hollywood nightclub called King King, located on 6th & La Brea.

It was there that I developed a weekly Tuesday evening Latin Jazz jam called Afro Cuban Sessions. Inspired by Cachao and those Cuban Jam Session albums, my idea was to host a night where we could play this type of music and provide musicians from L.A.’s Salsa and Latin Jazz community to really stretch out and showcase their talents. 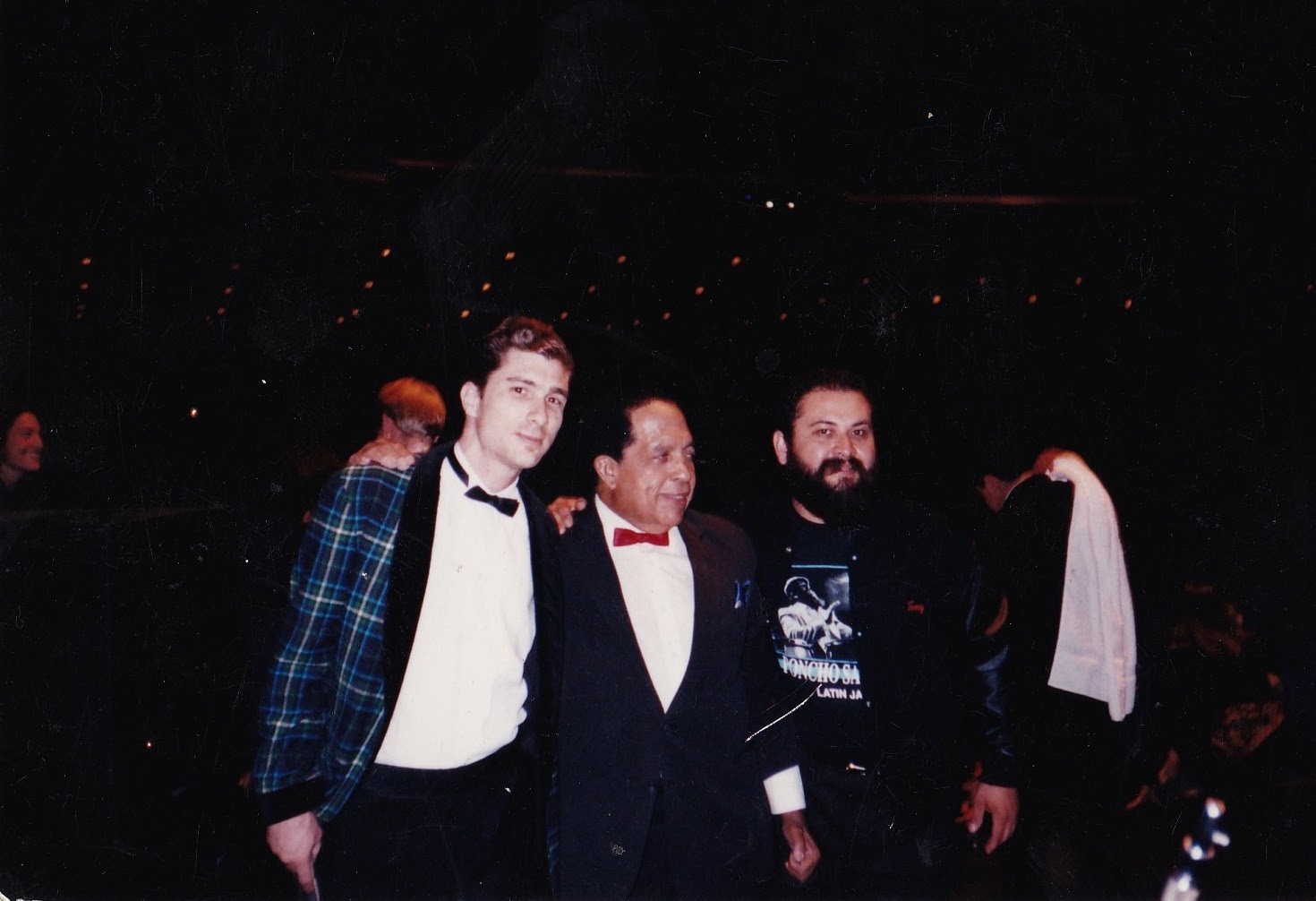 1992 with Cachao and Tony Banda in Berkeley, Ca. (photo by Sal Cracchiolo)

Nobody was offering something like this at that time and part of its success had to do with my beginner’s naivete.

I was just beginning to learn how to play this genre of music on the bass and I knew a few musicians in the Salsa scene, but some of them were skeptical and told me that nobody would want to come to something like this.

Well as it turned out, the night was a stellar success and became an L.A. institution, lasting five solid years and hosting many guest players of note from LA, New York, Miami, Cuba, Puerto Rico, and other South American countries.

In the process I was able to really get my playing together, preparing me for what was ahead 10 years later with Fellove. I was somehow instinctively connecting the dots without having much of any context. 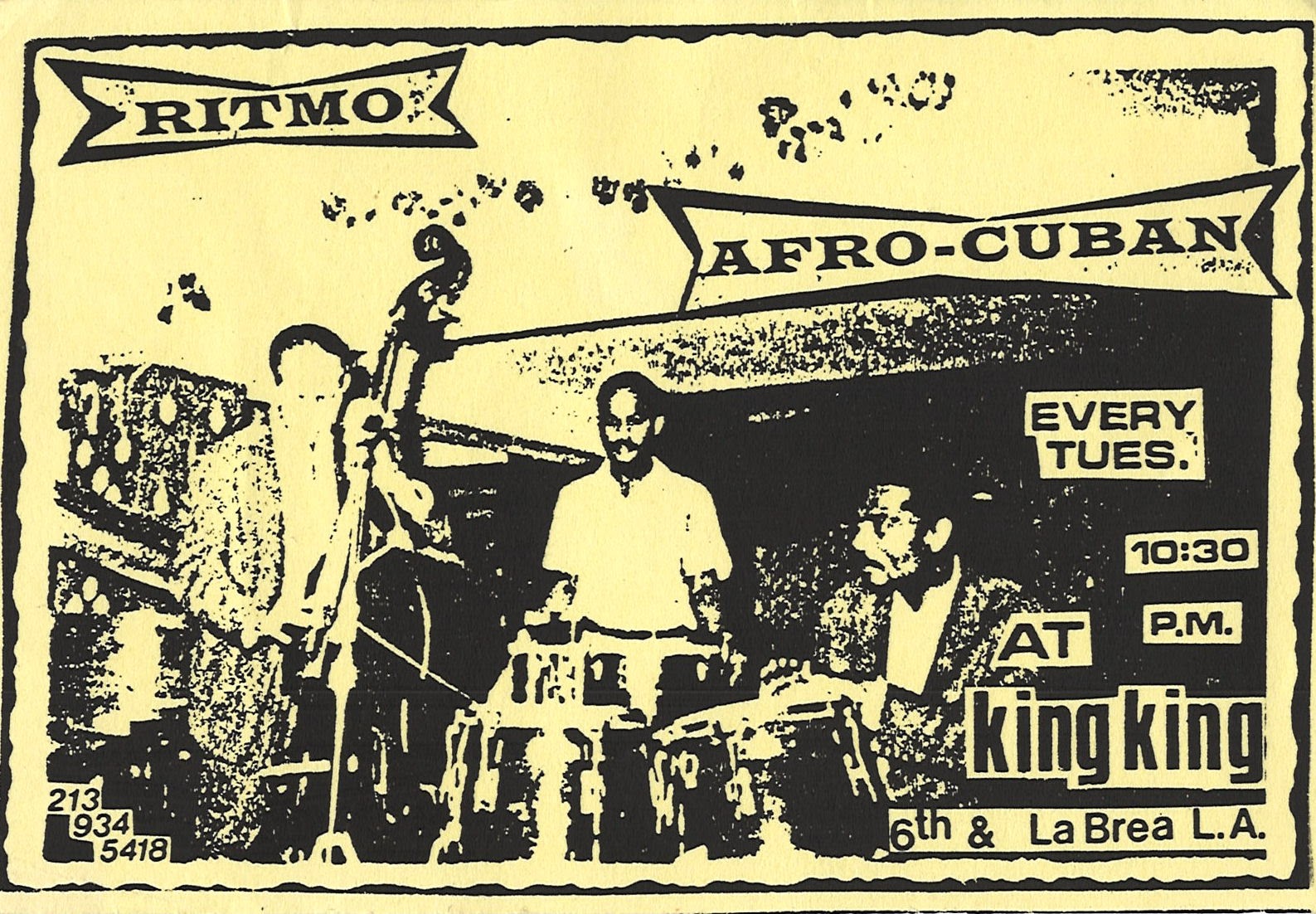 The Cuban Jam Session albums were also known as Descargas, a Cuban slang term for a jam session, “cutting loose”, etc.  The Descargas were what inspired me to learn and create similar music, never knowing that it was Fellove himself who was one of the few true inventors of this idiom.

The Machito Orchestra and composer Chico O’Farrill were both big influences on me early on in my quest for Cuban music, yet I had no idea that they were both directly connected to El Gran Fellove. It was as if Fellove was hidden in plain sight for years.

I had come to know Mario Grillo aka “Machito Jr.” and Chico O’Farrill personally during the early to mid-90s yet I never heard mention of Fellove from either of them. It wouldn’t be until my collaboration with Fellove that I would finally know the bigger picture of this rich ecosystem of creative geniuses; a nucleus known in Cuba as “Filin”.

Stay tuned for the next installation of The Fellove Backstory.

Are you a fan of Afro-Cuban music? What was the recording that first drew you into it? Leave a comment below about that, or any of your thoughts about this post.